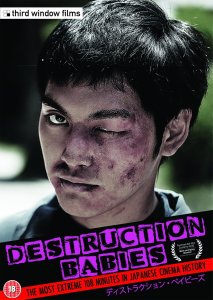 Destruction Babies is, in a word, violent. I could add a number of adjectives too – unflinchingly violent, unapologetically violent, artistically violent… the list goes on. But this latest release from indie film director Tetsuya Mariko, via Third Window Films, surprises in more ways than one.

The premise of the film starts off simply enough. Taira, a delinquent teen, suddenly leaves town after getting beaten up by the local gang. He wanders downtown Matsuyama in Shikoku, provoking fights with random bystanders – and no matter how much he’s kicked or knocked down he keeps getting up, clearly enjoying himself. His actions awaken the dark desires of highschooler Yuya, who encourages him to attack more people. At the same time, Taira’s younger brother Shota searches desperately for him across the city when no one else seems to care. But when the violent duo’s actions quickly take a more sinister turn, their lives – and the city – change overnight.

Destruction Babies gives little away at the beginning and, for me, its plot starts off quite slowly. However, when things suddenly heated up and sped up, I realised just how clever it was. This film really does jump out and smack you (metaphorically) when you least expect it, and it does so very effectively. What starts off as a seemingly simple story about an angsty young man plunges into a bloody exploration of right and wrong.

My favourite performance came from Yuya Yagira, who plays the terrifyingly silent and violent Taira. He speaks surprisingly little for a leading role but more than makes up for this silence through his acting skill. Despite doing nothing to redeem himself and his motivations for his aggression never really becoming clear, he’s very fun to watch. Masaki Suda as Yuya is similarly engrossing and his character goes through a more noticeable transformation, from naive highschooler to psycopath. Nana (Nana Komatsu) is the only female lead, playing a hostess, who again starts off fairly unassuming but undergoes a sudden change when she is caught up in Taira and Yuya’s actions.

I highly recommend Destruction Babies for fans of Japanese cinema who want to discover a lesser-known director. It’s unapologetically violent but you’ll be surprised by what you find when you scratch beneath the surface.