There’s a good chance you’ll have heard of Tashirojima in Japan by now. It’s featured on BBC documentaries, Youtube channels, books, newspaper articles and pretty much every medium. Why? Because Tashirojima is otherwise known as Cat Island and its main inhabitants are… cats.

Tashirojima is a small island in Miyagi Prefecture where cats outnumber the island’s ageing human population by almost four to one. The cats were originally brought to the island to help with pest control in the island’s silkwork farms but, as employment opportunities decreased in Tashirojima and more people moved elsewhere, there are now more cats than people.

Fishing is still an important industry on Tashirojima, which also explains why there’s so many (as in hundreds of) cats hanging around the ports. The island’s fishermen cared for and fed the cats believing they would bring them luck. They even built a small, cat-sized Cat Shrine – Nekokamisama – at the centre of the island in dedication of a cat that was killed by a falling rock.

There may be some merit behind the belief that cats bring good luck to the island. Tashirojima was close to the epicentre of the 2011 tsunami but managed to escape without too much damage and most of the debris was cleared within a year. 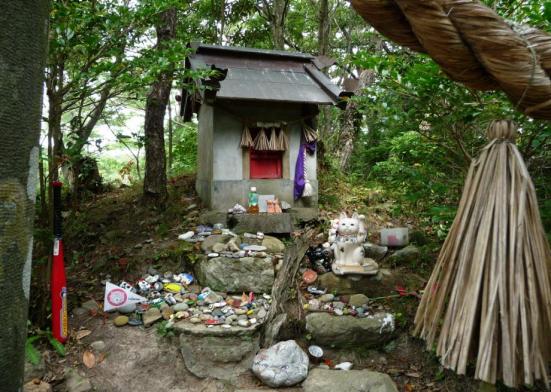 There are two settled areas in Tashirojima – the tiny village around Odamari Port in the north and a larger village around Nitoda Port in the south. Visitors can take walking trails and narrow roads through the forest between the two villages. Most of the cats gather in Nitoda Port but, as cats do, they wander so there’s a good chance you’ll see some cats wherever you visit.

Tashirojima is also known as Manga Island thanks to a manga-themed camping resort in the south of the island. There are several cottages shaped like cats, featuring cat-themed artwork by famous manga artists. The resort is open April to October. Apart from the cats roaming around, the resort is arguably the only other thing that would bring visitors to the island.

It’s unsurprising that Tashirojima has become something of a tourist attraction, despite the lack of tourist attractions. There are no restaurants, only a few shops and a small number of vending machines. The highlight is, obviously, the cats but a lot of people will visit for the day and take advantage of the walking trails and views. 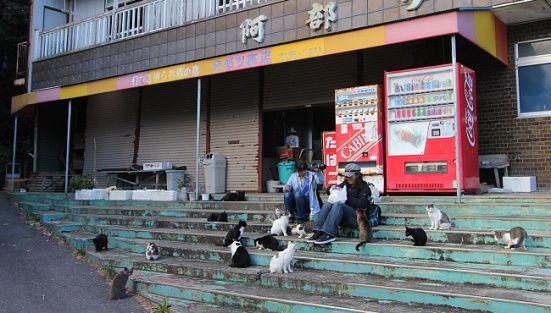 As for the health of the cats, vets do visit the island to check on their health but, from what I can tell, there have not been real attempts to control the population by neutering the cats. Although the locals do feed and look after them to an extent, I suspect when you actually live on an island populated by hundreds of cats, they may sometimes be more pests than cute and cuddly.

To visit Tashirojima, you can catch a bus from Ishinomaki Station to the Ajishima Line-mae bus stop. From there, take one of the ferries (45-60 minutes each way, three departures a day) to Tashirojima Island and get off at the Odomari or Nitoda ports. You purchase your ticket, which costs just over 1,000 yen, on the ferry.

Believe it or not, Tashirojima is just one of Japan’s so-called Cat Islands. It’s certainly the biggest and most-visited. No prizes for guessing why I want to visit a Cat Island when I return to Japan…