One Punch Man was released in Japan in 2015 and was hyped up by the anime-watching community worldwide. I missed the hype train when it pulled into the station but now that MangaUK is releasing it for UK audiences (17 July), I finally had a chance to watch it myself.

For me, the big question hanging over One Punch Man was ‘is it as great as everyone says it is?’ My answer is a definite yes!

Saitama is a hero for fun – he can beat even the mightiest foes with a single punch. But defeating one obscenely strong enemy after another with barely any effort means life quickly becomes boring. That is until Genos, a teenage cyborg, comes to Saitama and begs to be his disciple.

You might think the series’ main gag would mean it would be over by the first three episodes. But there’s 12 episodes and 6 OVA episodes in the MangaUK DVD collection, so where does the actual plot come from?

Without giving too much away (as I personally like going into anime series not knowing what to expect), Genos and Saitama join the Heroes Association to prove their worth. Despite his overwhelming physical power, Saitama only just scrapes through because he flunks the written test. Even officially becoming a hero is not enough to make others recognise you as one, and this is where much of Saitama’s struggles begin.

Pardon the pun, but One Punch Man is packed with punch lines (groan). With such an overpowered superhero for a main character, the series has to big up its comedy element and repeatedly breaks the fourth wall. The fight scenes are generously ridiculous (with enemies monologuing for ages only to be defeated with – you guessed it – one punch from Saitama). Saitama himself is adorable for how clueless and casual a hero he is. 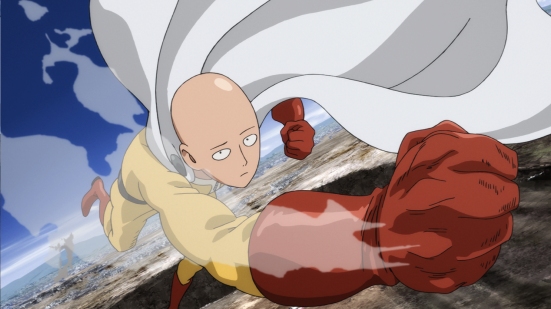 There are of course plenty of other heroes populating this series. For the purpose of padding out 12 episodes, we do get some good fight scenes from them before Saitama comes to the rescue. The only ones I admittedly found memorable were Genos for his undying loyalty and seriousness, and Sonic, the leather-clad ninja with a grudge against Saitama. Oh, and of course Mumen Rider, who is literally just a guy on a bike who also happens to be a Hero.

Personally, my favourite thing about One Punch Man is how self-aware it is. A show with its premise can’t not parody and poke fun at itself. If you like your action series and are in need of a laugh, this is one to watch.

One Punch Man Collection 1 is available to pre-order from MangaUK. It gets 8/10 from me!