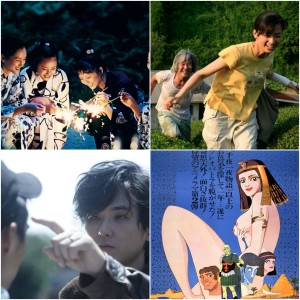 We’re coming to the end of film festival season in London, with a generous offering of Japanese films to boot. The second London East Asia Film Festival has been and gone and, while I didn’t see all the films I planned to, I managed to catch a few good ones.

The London East Asia Film Festival is still in its infancy and there were a few technical issues at some of the screenings I attended. But there is definitely a passion for East Asian cinema there that makes it worth checking out again next year.

Without further ado, here’s my obligatory film festival round up!

Cleopatra was the first foray into adult animation for ‘the god of manga’ Osamu Tezuka (most famously known for Astro Boy). Despite its unsuccessful release in the US back in the 70’s, I think western audiences today are much more ready for the erotic, outlandish madness that embodies this film. I wasn’t sure what to expect from Cleopatra but it has aged well and is an absolute romp! Three time travellers are transported back into the time of Cleopatra to uncover an alien plot. What’s not to like? You might not expect such a sexual film (one of the female characters is permanently topless, and there is indeed some sex) to be so damn funny. As well as some good old-fashioned slapstick, Cleopatra is quite possibly one of the earliest parody anime. There’s even an Astro Boy cameo and there are plenty of other hidden references, not all of which I can say I got. The good news is that Third Window is releasing Cleopatra on DVD, so keep an eye out for that.

Takumi Saitoh makes his directorial debut with Blank 13, which opens with a grimly funny scene of multiple mourners being turned away from the wrong funeral. 13 years ago, Koji’s gambling-addict and indebted father (Lily Franky) walked out on them, leaving their mother to raise them alone. When he and his brother learn their father is in hospital with stomach cancer and only has a few months to live, Koji, who still has some fond memories of him, visits him in hospital. At the funeral, a small but colourful cast of characters come to pay their respects and the brothers learn more about their father. Blank 13 jumps from the funeral to the past to Koji’s last visits to his father, adding to the confusion the brothers must feel. It’s a touching and quite funny film dealing with subjects that aren’t naturally funny; abandonment, absent fathers and the people they leave behind. There are some brilliant performances from Lily and Kanno Misuzu, who plays the badly done by mother. I hope this film gets picked up for UK release and we see more from Takumi Saitoh.

Three adult sisters live together in a huge old house, where both their father – leaving for another woman – and their mother abandoned them many years ago. At their father’s funeral, they learn that he has left behind a teenage daughter. On a whim, they invite Asano to live with them. Our Little Sister is an exploration of love in all its forms and will particularly resonate with viewers who have experienced family break up. The three older sisters are very different but each love Asano unconditionally, despite their great aunt’s reservations that she is the daughter of the woman who drove both their parents away. What Our Little Sister lacks in action it makes up for in character development and its exploration of challenges for women today, and life’s disappointments as well as joys.